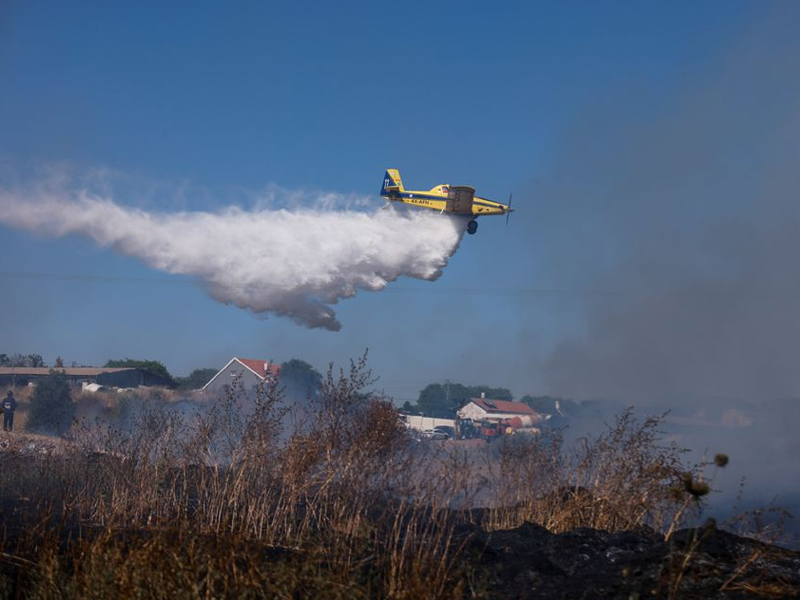 An Israeli firefighting plane extinguishes a fire on a field of wheat after a rocket launched from the Gaza Strip landed near homes in Moshav Zohar, Israel May 13, 2021.

The U.N. Security Council will publicly discuss the worsening violence between Israel and Palestinian militants on Sunday, diplomats said, reaching a compromise over U.S. objections to a meeting on Friday.
Diplomats said the United States, a close ally of Israel, had initially suggested a virtual public meeting could be held on Tuesday.
U.S. Secretary of State Antony Blinken said on Thursday he hoped waiting a few days would allow for “diplomacy to have some effect and to see if indeed we get a real de-escalation,” adding that Washington was “open to and supportive of a discussion, an open discussion, at the United Nations."
Hostilities entered their fifth day on Friday, with no sign of abating. Israel fired artillery and mounted more air strikes against Palestinian militants in the Gaza Strip amid constant rocket fire deep into Israel's commercial centre. read more
The 15-member council has met privately twice this week about the worst hostilities in the region in years, but has so far been unable to agree on a public statement, diplomats said.
Such statements are agreed to by consensus, and the United States did not believe it would be helpful, they said.
All council members also have to agree to a meeting under rules guiding the body's virtual operations during the COVID-19 pandemic.
Israel unleashed its offensive on militants in Gaza after Hamas fired rockets at Jerusalem and Tel Aviv in retaliation for Israeli police clashes with Palestinians near al-Aqsa mosque in East Jerusalem during the Muslim fasting month of Ramadan. read more
Worried that hostilities could spiral out of control, the United States is sending an envoy to the region.
“The U.S. will continue to actively engage in diplomacy at the highest levels to try to de-escalate tensions,” U.S. Ambassador to the United Nations Linda Thomas-Greenfield posted on Twitter after the Sunday meeting was agreed.