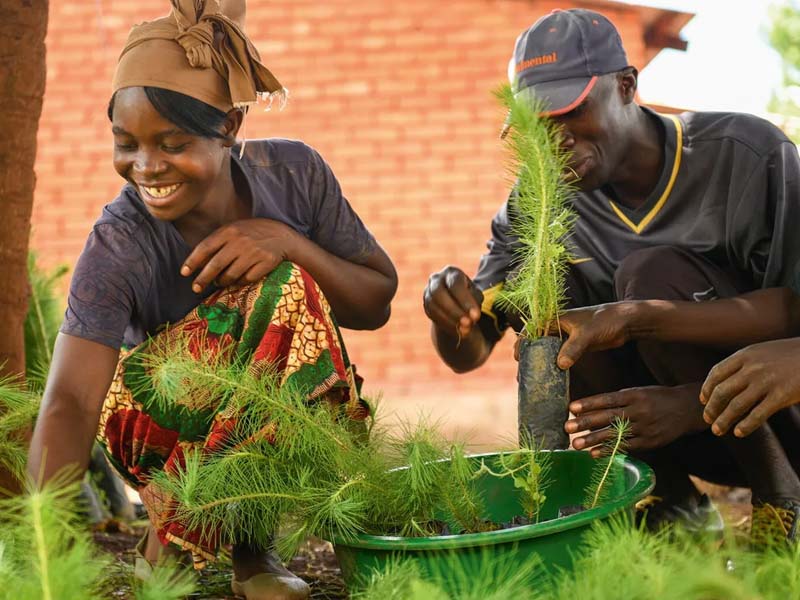 Due to the pandemic, tourism came to a virtual standstill in Africa last year. The financial strain experienced by the travel sector was also felt by conservation groups, which depend on tourism to increase traffic in the parks, which can ward off poachers, and also to uplift local communities that might otherwise succumb to illegally hunting for bushmeat. A number of groups set out to counteract this. Wilderness Safaris, for example, delivered 6,000 food parcels in 2020 to families in remote areas of Botswana, Kenya, Rwanda, Namibia, Zimbabwe and Zambia.

While the full impact of the pandemic on the illegal bushmeat trade and poaching is unknown, recent data for South Africa is surprisingly encouraging, showing a massive decline in rhino poaching. The Department of Environmental Affairs, Forestry and Fisheries revealed that reported cases of rhinos being killed for their horns were down 33% on the previous year.
This success story is, in part, due to the savvy deployment of new technology. In March, Samsung teamed up with US internet media company Africam.com and the Black Mamba Anti-Poaching Unit, an all-female patrol group, to launch Wildlife Watch. With handsets streaming live footage from Balule Nature Reserve, part of the Greater Kruger National Park, where poaching is prevalent, this initiative encourages people around the world to help the poaching unit by monitoring wildlife online.
There was also good news for other conservationists on the continent, with the Whitley Fund For Nature providing £40,000 to three different initiatives. This will help rebuild habitats for the critically endangered hirola (an antelope species) in Kenya, chimpanzees in Nigeria and frogs in South Africa.
One of the key battles facing conservationists across the globe is land degradation, something The Bonn Challenge set out to change in 2011. The global initiative aims to restore 350 million hectares of degraded and deforested landscapes by 2030. Malawi and Rwanda both signed up
for the project. Since then, the Malawi Youth Forest Restoration Programme has helped to safeguard biodiversity by restoring two million hectares, with the government committing in 2020 to restore a further 2.5 million hectares over the next decade. Rwanda, meanwhile, has pledged to restore 82% of its deforested landscapes by 2030.
There was also good news for Africa’s Great Green Wall project this year — becoming the world’s most ambitious reforestation project, with a plan to plant 100 million hectares of trees and vegetation by 2030, stretching 4,400 miles from Senegal in the west to Djibouti in the east. By September 2020, the project, which nurtures communities by creating rural jobs as well reforesting land, was only 4% complete halfway through its schedule. A recent injection of funds by governments and banks has massively boosted the project, with it already increasing to 16% by February 2021 to make its goal. The project is set to sustain livelihood and combat climate change and desertification.
Safari lodges across the continent are also making headway with more green initiatives — the Cheetah Plains lodge in Sabi Sand, South Africa, for example, has rolled out a fleet of electric 4x4 vehicles for its safaris, while Red Carnation opened Xigera Safari Lodge in Botswana last December, with 95% of its energy provided by a solar hybrid power system and hot water provided by thermodynamic geysers.
Towards the end of 2020, a reef complex was discovered in east Africa that’s a haven of biodiversity, with corals here thriving despite the climate crisis. Off the coast of Tanzania and Kenya, it’s a rare spot in the ocean, cooled by channels formed during Kilimanjaro’s creation, which helps to protect corals and marine mammals from rising sea temperatures and habitat loss from coral bleaching. Scientists are calling for the destination to be protected from coastal developments and fishing, with it having potential to be an important sanctuary and refuge for marine life.
Around the same time, conservation specialists Blue Ventures and Maliasili teamed up to create a new movement for conservation in the Western Indian Ocean. The African Marine Conservation Leadership Programme is bringing marine conservation leaders together from the Comoros, Kenya and Tanzania to protect the area’s incredible marine diversity. Community-led marine conservation can increase the size of fish populations, and there’s been a larger push for more traditional styles of fishing in the area over the past year, too, which is a more sustainable form of fishing.
This is a push that also started in Madagascar in 2020, with a focus on community-led aquaculture supporting local communities while conserving the ocean’s species. The Velondriake Locally Managed Marine Area is encouraging traditional, small-scale fishing while also training locals to be sea cucumber farmers. The MIHARI Network, meanwhile, is creating leadership opportunities for women in fisheries this year, changing the landscape of conservation for the future.
BY TAMSIN WRESSELL (In nationalgeographic.co.uk)